FOR SALE BY AUCTION – One collector’s life 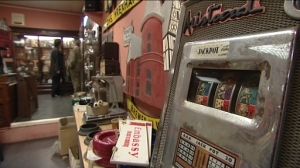 ‘Now this is an interesting thing’.

In fact, he’s responsible for three hundred and forty odd (and we mean odd) lots of interesting things – all very diverse, from radios which need valves and probably still get Lord Haw Haw if you tune them in carefully enough, to a scattering of air raid warden helmets and gasmasks that should come in handy if we all have to take to our Anderson shelters again…

Bob started collecting all these things when he was a teenager in Wrexham – so you have old cigarette signs that predate any sort of health warning whatsoever – and a transparent ball they used to hang up in Butlins in Pwllheli where if you guessed the number of cigarette packets that filled it, you could win enough nicotine to do a fair impression of a one-person industrial furnace. There’s also the grill from Wrexham’s prison which the guard used to get his light through; reminders all over the walls that Wrexham was a brewery town – not just Wrexham Lager but old breweries like Soames’ that went in the Thirties.

Just hanging around Wingett’s auction rooms for a couple of hours and you realise that until Wednesday, when the hammer falls, this is a sort of alternative museum. People are coming to reminisce and touch and wonder about buying – because so much of this stuff is fairly impossible to estimate, but everything Bob bought has a story behind it – how do you guess what it’s worth? Are the milk churns which lined the railway station at Wrexham General going to end up in someone’s garden? Who will put their hand up to buy the frankly scary looking Baby gasmask?

After a collecting career of six decades, Bob’s now amassed enough stuff to fill a warehouse. Or two loads of auction rooms. Rather like Elton John at Sotheby’s years ago, he’s keeping the cataloguers busy. But he seems to have come to the point that stuff and collections and a love of the past always reaches: looking round the room at all the potential buyers, Bob doesn’t seem to mind letting things go. He’s never sold anything from his archive in his life – and now that life’s approaching 80 (you’d never guess to meet him) – he’s ready to say goodbye to the gas powered hairdryer, the cases full of marble stoppered glass bottles,  the air raid warning siren (and you could have great fun on New Year’s Eve with that).

The hammer falls on six decades of collecting on Wednesday. No-one quite knows how much money sentiment – and a room full of interested Wrexham-ites – might bring when it does descend; but for a little more time the alternative and unofficial museum of Wrexham is lying in an auction rooms in town, all ready to find a new owner and live a new life of stuff…….and all one can hope is that you don’t live next door to the people who end up bidding for the Air Raid Siren……

You can watch Rob’s report here

« Energy Prices: The Real Story
‘Wales This Week’ looks at the state of the Welsh housing market »